Week 5 (Day 28): ISTANBUL (TURKEY)
Our Powerhouse Journey Around the World continues. We have now travelled 4,645 miles from Bangkok to our new destination of Istanbul, Turkey. 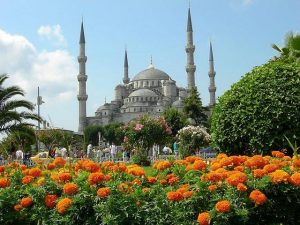 Istanbul is the largest city in Turkey. It straddles the Bosphorus, which is a Strait that forms part of the boundary between Europe and Asia. Istanbul covers an area of 2,063 sq miles.

Though Istanbul is a very large city, it is fairly safe. It is Europe’s 3rd largest city. It is also regarded as one of Europe’s safest cities. However, crime does still exist. The most common threats to personal safety are associated with money. Purse snatching occurs mostly in the tourist areas and is generally carried out by children. When carrying a bag hold it close to you and check now and then that it is closed.

Some of the most popular tourist attractions include The Blue Mosque, Grand Bazaar, Dolmabahce Palace, and Basilica Cistern.

BLUE MOSQUE
The Blue Mosque is an active house of worship, which means that tourists should be aware that it is closed five times a day for Muslims to pray. The Mosque gets its name from the blue tiles that can be seen on the dome and upper levels of the interior.

The Grand Bazaar houses 5,000 shops, which makes it the largest indoor market in the world. The shops sell jewelry, antiques, carpets and spices. It’s no wonder the Bazaar receives more than a quarter-million visitors a day.

DOLMABAHCE PALACE
The Dolmabahce Palace has been likened to the Palace of Versailles in France, because of its glamor and luxuriousness. Fourteen tons of gold leaf was used to build this beautiful palace in the 19th century. The world’s largest chandelier hangs in the Palace and was a gift from Queen Victoria. The Palace was home to six sultans from 1856 to 1924. 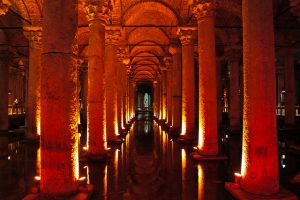 This underground cistern has been providing the residents of Istanbul with water as far back as the six century. Built by ancient romans, its architecture is amazing. The Basilica Cistern is known as the Sunken Palace, and can hold up to 2.8 million cubic feet of water.

While practically all neighborhoods around Istanbul are considered safe, it is still always sensible to walk where you see lots of people, especially women. Some of the safest parts are Beyoglu, and the European part of the Bosphorus. Never go out alone at night and if you take a taxi be sure to take one from the hotel, or from a taxi station.

Always apply Powerhouse Self-Defense’s rule of PROI: PREDICTION of misplaced situations, that is being aware of anything that appears out of context. RECOGNITION of potentially harmful behavior. OBSERVATION of your surroundings. Look for street signs and landmarks. Know exactly where you are at ALL times. INTUITION: Trust your gut and when in doubt, both feet out!

Physical assaults against women are not common, as Turkish men are generally respectful of women. However, female tourists may be stared at or followed. While we don’t want to appear rude, a simple smile can be misunderstood. So avoid eye contact with men on the street and keep any interactions formal.

1. Istanbul is the only city in the world that straddles two continents, Europe and Asia.
2. Tulips originated in Istanbul and were sent to the Netherlands.
3. Agatha Christie wrote her famous novel “Murder on the Orient Express” at the Pera Palace Hotel in Istanbul.
4. Istanbul has been the Capital of three major empires, Roman, Byzantine and Ottaman.
5. Istanbul’s subway is the 3rd oldest in the world (1875), after London (1863) and New York (1868).