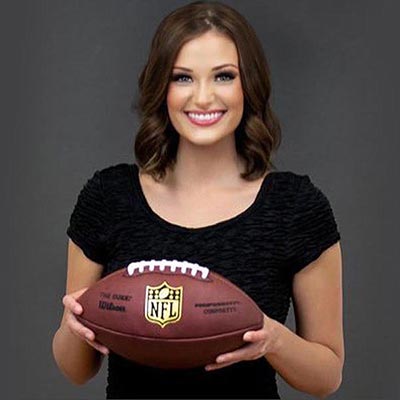 Brianna Dix’s Goal Is To Be #1 At the Dallas Cowboys!

This Monday we had the pleasure of spotlighting 23 year old Brianna Dix, who is a Dallas Cowboys Beat Reporter for D210SportsTV that airs on Spectrum Cable Channel 15 on Monday Nights At 11 PM.

Brianna was born to be a part of the sports industry, as her father introduced her to the Dallas Cowboys at an early age. Brianna began to realize that her passion for the NFL, wasn’t like most girls her age. So she decided to major in Broadcast Communication at Dallas Baptist University, where she interned for the Dallas Cowboys as a Game-Day Event Presenter. This was the confirmation she needed, her love for the NFL wasn’t just a passion but a gift from God.

To learn more about Brianna’s goal to be one of the top female reporters of all time read Jun’s Monday Millennial exclusive interview:

How old were you when you fell in love with sports?

For as long as I can remember I watched sports with my dad. We would watch the NFL every Sunday or Monday Night Football, and my obsession for the Dallas Cowboys and the game of football began. We would sit together in the living room and yell at the screen together and on Thanksgiving growing up, I would sit on my dad’s lap and watch the Cowboy game with the men, while the women in my family looked at Black Friday Ads. I cannot remember a time I did not watch sports.

Who was the first athlete you got a chance to interview?

The first athlete I had the chance to interview was former Dallas Cowboys’ linebacker and dirty dozen draft pick Bob Breunig. It was a phone interview, and I asked him about his time with “America’s Team” during a winning era and his faith and identity in Christ. The interview definitely reaffirmed my career path and love for reporting/sports.

Some men insist they turn to sports to get a break from women. How do you feel about that?

I understand that some women are not like me. They do not love sports or football and would rather watch something else on the TV. Many men like to watch sports alone or with their male friends for a “bro night” to eat and watch the big game. My mom, even though she has never LOVED sports, she watches sports to spend time with my dad because she knows that he loves it. However, some women like me love sports and will watch them as much as they can. The sports world is changing, and more and more women are seen on the sidelines reporting or commentating behind a desk. The industry has evolved and now women can have a place in a male dominated industry.

Have you ever had an athlete that was unwilling to interview with you?

No I have not.

How important is it for women to watch how she dresses when working in a male dominating field?

Looking and acting professional is extremely important in this field. Being a sports reporter, you are constantly around male athletes, coaches, and media staff. But these men are normal people with their own thoughts and desires that are human nature. They are fathers, husbands, and sons. It is imperative to always look professional and wear clothing in front of the camera or on the sidelines that reflects that and will not be distracting or send the wrong message. Classiness and modesty is the way I want to appear on the job, and that correlates with my own values and morals.

What are your thoughts on the Me Too Movement?

I think it is important in the aspect that women of any race or background who have been victims of sexual assault or abuse can feel that they are not alone and have women to talk to who have gone through similar situations. That they can feel comfortable to talk through the issues they face and the trauma they deal with on a regular basis who have gone through the same thing, and to not hide their feelings or their voice by casting them aside by feeling ashamed or unloved. No one is alone. However, the only true thing can heal is the Lord and his presence in someone’s life. I do not agree with bad mouthing the President of the United States surrounding this issue and all the things the press and media have done to make it worse. I do not care if someone does not like him or agree with his policies, he is the president and with his position of authority should come respect.

What motivates you to get out of bed in the morning?

Coffee and Jesus. In all honestly that is it. As a Christian, I believe that my identity and purpose are found in the Lord. Each new day He has given me, is a gift and an opportunity to fulfill His calling in my life. I want to leave a mark and make a difference in the lives of others by using my passions and talents He has given me to bring glory to Him and share with others the hope I have in Him and the true meaning of life. I believe only He will truly satisfy. Although coffee does the trick in the morning! I love drinking coffee along with my devotion in the morning, basking in the beauty of a new day. I am a morning person.

If we were sitting here a year from now celebrating what a great year it has been for you in your current role, what would you have achieved?

I will have taken advantage of the incredible opportunity the Lord has given me to do what I love every day and made the most of each one. As a sports reporter, I love telling a story. I love finding out the why behind an athlete and what drives him/her to where they are. My goal for this year is to tell the story behind each player on the Dallas Cowboys roster and share what makes them unique and their story that is worth sharing. In today’s time, NFL athletes are looked at as immortals and celebrities, when in reality they are the same as your average person with regular doubts and fears. They have been given an incredible platform and gift from the Lord, and I want to dive into the story of how they got to where they are.

Right now during the off-season as a Dallas Cowboys Beat Reporter it is not as hectic as it will be during the season, so on a regular day I write an article over a current event and it is posted to the website. I do a report at the Dallas Cowboys World Headquarters at the Star in Frisco about every other Friday discussing current events for that week that has happened. Now during the off-season I discuss coaching changes, signing free agents, and players that are released. Once the Draft happens in a couple weeks and training camp begins, things will pick up speed and there will be more articles published and more reports from practice, camp, and home games at the Stadium on the website and airing on the show on Spectrum Cable Channel 15 at 11pm on Monday Nights.

If you had to start over from scratch, knowing what you know now about the sports industry, what would you do differently?

I would have started interviewing athletes and preparing a reel in high school, instead of in college to get experience. I would definitely have begun videoing interviews instead of recording them, to be able to put footage from the interview into a reel. My first several interviews I recorded, and I wish I would have video footage to incorporate into my reel from them.

What are three things a girl wanting to have a successful career in the sports industry needs to keep in mind?