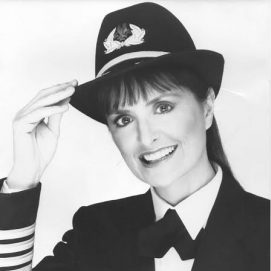 I began my airline career with American Airlines in March of 1973. Until my retirement in August of 1998 I was flying as a senior Captain on the Boeing 757 and Boeing 767 aircraft. In addition to flying the domestic Trans-Continental routes, I flew American’s international routes to the Caribbean Islands, South America and Europe.

Prior flying duties as a Captain with American included flying the Boeing 727. As the workhorse of our fleet, the Boeing 727 provided a great opportunity to fly into most of the domestic cities that are served by American Airlines. In addition, I have flown as a Flight Engineer and First officer on the B-727 on both domestic and international routes.

Created the “Information Bank” – a networking system for the International Society of Women Airline pilots to help further their flying careers and the careers of women pilots just starting out.

Guest speaker at many schools, colleges and private clubs including the Federal Aviation Association and the Ninety Nines, the oldest aviation organization for women aviators. The club’s first president was Amelia Earhart.

Currently involved in mentoring several pilots who are pursuing a career in
aviation.

Researched and co-authored a magazine article with Dr. Jonathan Scher about pregnancy and flying published in Mothers Today Magazine

1979 – Recognized as a “Super Sister” and placed on a Super Sister Trading Card. These trading cards were distributed to school age children nationwide.

1998 – Recipient of the “Women Making History Award” from the National Museum of Women’s History in Washington, D.C.

My American Airlines uniform is on display at the Smithsonian Air&Space Museum in Washington, D.C.

Personal Information
My husband and I live in New York City and have two grown children.