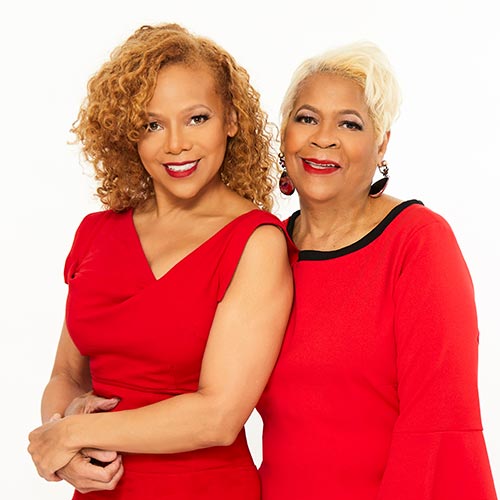 Donna Richardson Joyner is a best-selling author, international motivational speaker and TV Host. She has spread the gospel of good health; mind, body and spirit. She has traveled to 50 states, 50 countries and 6 continents empowering, educating and energizing women, children and families. She started the business because she was sick and tired of seeing loved ones, church members and people in African American communities dying from preventable illnesses. Her mission is to help people become a witness to fitness by combining faith, fitness, food and fellowship.

For over 25 years Donna and her mom who is 81 years young blessed family, friends and celebrities with their historically rich family recipe, Mama LaVerne’s Chicken and Waffles. They are passing down a generational legacy and for the first ever they have packaged chicken seasoning waffle and pancake mix so you can enjoy at home. In the midst of the pandemic, personal loss of loved ones, family illnesses, uncertainties and challenges they stepped out on faith and packaged love and legacy into the mixes so you, family and friends can share traditions and create memories.

Donna attended Hollins University and was a teacher at Montgomery County Community College. She is the only council member appointed by President Bush and President Obama to serve on the President’s Council for Fitness, Sports and Nutrition. She was an ambassador for First Lady Michelle Obama’s “Let’s Move Initiative.” Donna has starred in over 25 award winning videos including best-selling “Buns of Steel” which sold over 10 million copies. She starred in best- selling videos ESPN, Nike, Sweating in the Spirit, Body Gospel and her own line of videos. Her Sweating in the Spirit DVD was featured in Tyler Perry’s movie “Diary of a Mad Black Woman.” Donna was one of Nike’s Female Athletes to have her own signature shoe, The Donna Richardson “Air Max Mundo.” She created the first Tiny House for retail for women and men clothing and accessories. Donna continues to be a strong leader and innovator.

Donna is a TV Contributor for CNN, MSNBC, FOX, ABC, TBN and other networks. She was the producer and host of “The Donna Richardson’s Mind, Body and Spirit Show,” and “The Sweating in the Spirit Show” on the Word Network. She also was the former co-host of the ESPN Fitness Pro’s Show” and fitness expert for NBC “Today Show.” Donna has appeared in commercials and print advertisement for Proctor & Gamble, Kellogg’s, McDonald’s, Kmart, Walmart, ESPN, Nike, PGA, LPGA, etc.

She has lectured and conducted seminars at schools, community centers, churches, corporations, universities and senior centers around the globe. She has been a featured speaker with God’s Leading Ladies, Sisters in the Spirit, Pantene Total You, Eliminating Childhood Obesity and many other tours.  Donna climbed the tallest free standing mountain in the world, Kilimanjaro and served on a missionary that provided food, clothes and school supplies for thousands of children at orphanages in Arusha, Africa. She led the first team of African American Women to run 200 miles in the Hood to Coast Relay and raised funds for the American Cancer Society. She ran in the Paris Marathon, raising awareness and funds for the North Dallas Suicide Crisis Center. Donna continues to create change and make a difference through her philanthropic and humanitarian work.

She was inducted into The National Fitness Hall of Fame and was named by Essence Magazine “One of Twenty Five of The Most Inspiring Women in America.” She received the Mental & Physical Health Award from the Congressional Black Caucus. She was awarded the “Family Leadership Legacy Award” by the Jack & Jill of America Foundation. Donna broke the Guinness Book of World Records for the world’s largest line dance with over 50,000 participants at Mega-fest with Bishop T.D. Jakes. She was also selected by Fitness Magazine as one of the top movers and shakers. She received The Centennial Health Award from Delta Sigma Theta Sorority, Inc. and the Presidential Award from Alpha Kappa Alpha Sorority, Inc. She was honored with The Christian Literary Trailblazer Award, and The All-Star Gospel Celebration Slam Dunk Award. Recently, Donna was awarded The Ruby Award for her outstanding work in empowering and mentoring young girls and women.