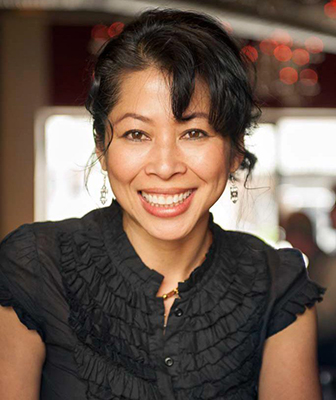 LOUNG UNG The activist and bestselling author whose bestselling memoir First They Killed My Father, about surviving the Cambodian genocide as a child, was made into the critically acclaimed feature film, produced & directed by Angelina Jolie. The screenplay was co-written by the author and Angelina Jolie (Netflix, 09/2017). Loung was also one of the writers for the “Girl Rising,” a groundbreaking documentary film directed by Academy Award nominee Richard Robbins. The book received the Asian/Pacific American Librarians’ Association Award for Excellence in Adult Non-fiction Literature (2001), and is widely taught and selected for community read programs in high schools and universities across the U.S. and internationally. Loung’s other books include Lucky Child: A Daughter of Cambodia Reunites with the Sister She Left Behind, and Lulu in the Sky: A Daughter of Cambodia Finds Love, Healing and Double Happiness. For 10 years, she was the spokesperson for the “Campaign for a Landmine Free World,” a project of the Vietnam Veterans of America Foundation that co-founded the International Campaign to Ban Landmines and was co-recipient of the Nobel Peace Prize in 1997. “Once you have heard Loung speak, you are drawn in and left feeling good and wanting t do something positive with your life.” — General Manager, Cathay Pacific Airlines; India & Middle East. “Loung delivers an empowering message of survival, resilience, and hope.”