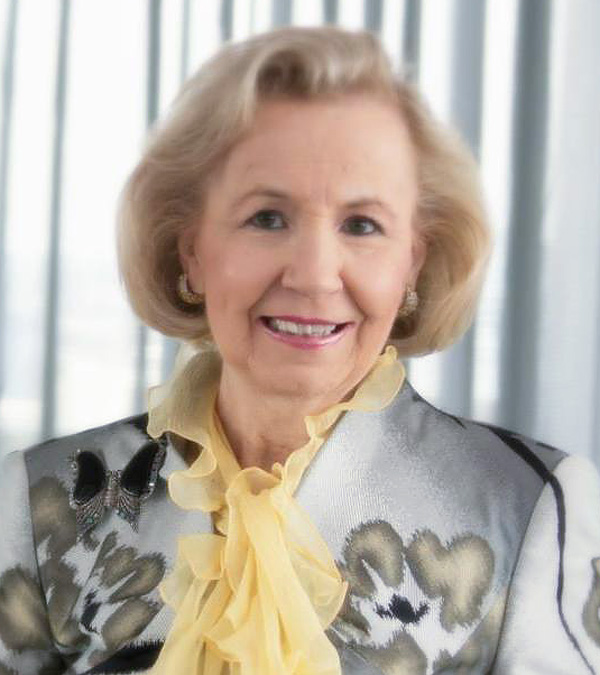 Yvonne Crum is not your typical product of a disadvantaged childhood. Upon becoming a young woman, she decided that who she would become and what she would ultimately accomplish would be determined not by fate – but by she herself.

Coming from a background in Sociology and Psychology, she quickly realized a career in social work wasn’t where she would make her mark.

Yvonne joined Braniff Airlines in 1964, ultimately retiring in 2010 from American Airlines after being diagnosed with Breast Cancer. During her career as a flight attendant, she worked in flight service management, recruiting, new route presentations, eventually being named to the Flight Attendants Hall of Fame. Throughout her airline career, Yvonne volunteered in her community – committed to make a difference. Then, she discovered the Dallas Summer Musicals. As if magic and seemingly overnight, Yvonne went from being a full-time wife, mother, flight attendant and community volunteer to a somewhat local force of nature.

She threw herself into the musicals, with her love of music and theater and her excitement of meeting all the talented performers, and served president of the Musical’s Guild for six years. Yvonne worked on the Communications Council of Dallas to help make the state a major player in the film industry and raising much needed funds for the Texas Film Commission. She went on to chair the Communicator of the Year Award three years with Horton Foote, Sandy Duncan and Larry Hagman.

In 1983, Yvonne was tapped to be Southwest regional director of the Statue of Liberty/Ellis Island Foundation, working with Lee Iacocca. Also that year, she joined former sportscaster Scott Murray to chair the Leukemia Society of America’s first celebrity waiter’s luncheon, which went on to be an annual fundraiser. She also served on the board of directors of the American Heart Association for many years, chairing its annual fundraising luncheon a number of times. Yvonne’s amazing fundraising abilities really garnered attention when she agreed to chair the annual luncheon style show for The Kidney Foundation of Texas 1976.

In 2001 she signed on to chair the annual fundraising luncheon and style show for KidneyTexas – this time calling on friend and designer Bob Mackie as guest designer – and topped her previous accomplishments.
She has lent her fundraising, organizing and motivational skills to many causes in Dallas, serving on boards, chairing luncheons, dinners and galas including Dallas Children’s Theater, Mental Health Association, Nexus Recovery Center, National Women’s Board, Dallas Museum of Art, Northwood University and the DIFFA Style Council and all totalling over $8 Million in her career..

Few charitable causes delight her more than her work with the Women’s Council of the Dallas Arboretum and Botanical Garden. She chaired its Gatsby Gala. However it’s the annual Mad Hatter’s Tea Party which she eagerly awaits each spring. She has chaired the fundraiser and headed virtually every committee. Each year attendees look forward to seeing how elegant, outlandish or creative her hat or costume will be.
Moved by what she felt was an inordinate number of suicide deaths in the community, Yvonne sought a way to bring attention and understanding to the usually taboo subject. The result has not only shown a light on the subject, the impact on survivors (the loved ones left behind) and provided outreach, with her creation of Suicide and Crisis Center Fresh Faces of Fashion, but found a sensitive way to raise more than $1 million in its first five years. She has been honored with The Distinguished Woman Award from Northwood University in 2001, the Dallas Historical Society award for Excellence in Volunteering in 2006 and in 2009 she was named Woman of the Year by Les Femmes du Monde. Yvonne received the most prestigious Honorary Doctorate from Northwood University 2009.

Yvonne and her husband, Mayo, have been married 45 years. Their son Michael, along with granddaughter Samantha, also live in Dallas.