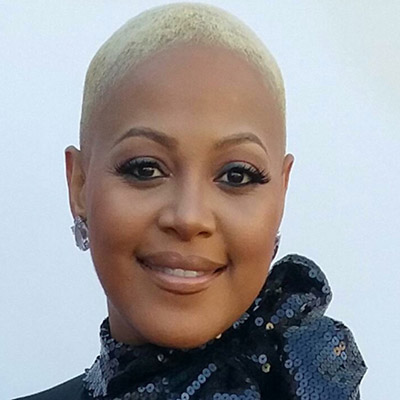 Lifestyle Expert Extraordinaire, entrepreneur, model, author and philanthropist, Anita Hawkins is the perfect combination of brains, beauty and fierce determination to succeed at whatever she sets out to accomplish.

Anita grew up in Gary, Indiana, where her entrepreneurial spirit took flight when she was still in her teens. Upon inheriting her grandmother’s hair salon, Anita did what very few young women her age would have had the insight and resolve to do…she worked it! After getting her cosmetology license, Anita grew her clientele by operating both in the salon and going house to house servicing clients who were unable to travel to her location. This was to be the first of many successful business ventures for the tiny young woman with big dreams. Dreams she would manage to accomplish in spite of having her childhood and youthful innocence shattered at an early age when she was molested by her older brother for a period of years beginning in the 2nd grade. This unimaginable violation sent Anita down a devastating path of promiscuity and self-doubt that resulted in teen pregnancy, becoming a ward of the state after her father disowned her, and ultimately, she was tasked with the incredible challenge of building a life for herself and her infant son all by age fifteen. It was the love and generosity of a family friend who took Anita in and cared for her son free of charge that enabled her to continue her high school education and begin to build a life for herself and her son.

By 2000, Anita had married, and she and her husband, former MLB pitcher LaTroy Hawkins moved to Frisco, TX where they had a daughter. In 2006, she launched Trokar Industries, LLC. Since its inception, Trokar has acquired a number of land developments around the state of Texas and celebrated a tremendous victory in September 2014 when D.R. Horton purchased a parcel of land from Trokar for 1.53 million dollars.

After being diagnosed with a rare blood disorder, Anita decided it was time to make some lifestyle changes of her own. Her love of healthy eating and exercise led to her acquisition of the Fresh Healthy Café franchise master for the Dallas/Ft. Worth area which she operates under Lady Eloise, LLC. Restaurant ownership had always been a desire for the mother of two, and after doing a great deal of research, she decided upon the Fresh Healthy Café brand because of the company’s commitment to values that mirrored her own philosophies. Anita celebrated the opening of the flagship location in Prosper in October 2015 with lines out the door during lunch and dinner hours! Her tenacity and business savvy has not gone without notice. Anita was recognized by the National Association of Professional Women for Outstanding Excellence and Dedication to Her Profession and the Advancement of Women and was named one of the National Association of Distinguished Professionals’ prestigious Women of Distinction. In 2015, she was named by 10 Shades of Success as one of Dallas’ Most Successful Women.

Anita is as abundant in beauty as she is in business know-how. As a model and spokesperson, Anita has walked the runway in a number of high fashion events including MegaFest 2015, Designer’s Rack at Neiman Marcus where she donned Pray by percy ray, Grace the Runway benefiting Simply Grace at the Women’s Museum at Fair Park in Dallas and the ShonDanz Entertainment’s Runway Extravaganza wearing show-stopping designs by Andre Terry.  In November 2014, she graced the cover of Curvy Connect Magazine (CCM) and was featured in a dazzling seven-page editorial spread. CCM rightfully dubbed Anita “The One to Watch” in 2015!  She has also been featured on Dallas’ CW 33, FOX 4, Dallas High Life TV on the UA Network, Saigon Network’s The Chau Show, KRNB 105.7, K104 FM, Heaven 97, KRLD Talk Radio’s CEO Spotlight, Street Speaker Radio and The Andy Brown Online Happy Hour with editorial features in The Dallas Morning News, The Dallas Weekly, Southern Dallas County Magazine and Texas Metro News.  She also participated in the panel discussion “Turning Passion into Profit” during Full Figured Fashion Week in New York. Most recently, she was named Duchess of the Krewe de Etoiles 2016 Gala Masquerade Ball Royal Court.

With her tremendous success, Anita has not forgotten the age-old proverb, to whom much is given, much is required.  Generous does not begin to describe the dedication and hands-on involvement with which Anita supports her many charitable affiliations. She walks for St. Jude Children’s Hospital and is one of the organization’s top individual and team fundraisers and serves as a member on the Frisco planning committee for the charity. She gathers and donates items throughout the year for Where are You? which benefits homeless children and their families in the Dallas area. In January 2015, Anita began her tenure on the Board of Directors for Minnie’s Food Pantry and has donated over $100,000 to the organization and its mission to feed the homeless. In November, Minnie’s presented Anita with the Community Service Award for her leadership and commitment to the organization. Annually, she and her husband sponsor the college education of a deserving student to the school of their choice through the Jackie Robinson Foundation.  In 2014, she launched the Find One Reason to Smile campaign benefiting survivors of domestic abuse. The first recipient, Dallas’ Women Called Moses Outreach Center, received over $16,000 from Find One Reason to Smile to aid their mission of assisting women and their children to escape the vicious cycle of domestic abuse. She also serves as a board member for the Source of Hope. One of their many community events includes providing free meals, haircuts and shaves to the homeless on the fourth Saturday of every month. Anita loves putting her salon and barber skills to work for those in need!

Destined for greatness and not slowing down anytime soon, Anita has added another title to her already impressive repertoire…author. Anita chronicles her rise from the depths of abuse, anger and despair to triumph, self-love and success in her debut novel The Storm After The Storm released last year. Today, Anita Hawkins is both self-assured and selfless. She has overcome the harshest of circumstances to become a successful businesswoman, lifestyle expert and fashionista while giving back to those in need and most importantly being a dedicated wife and mother to her family. “Curvy Connect said it best, Anita has definitely been the One to Watch and will be for many years to come!